There is no escaping choice 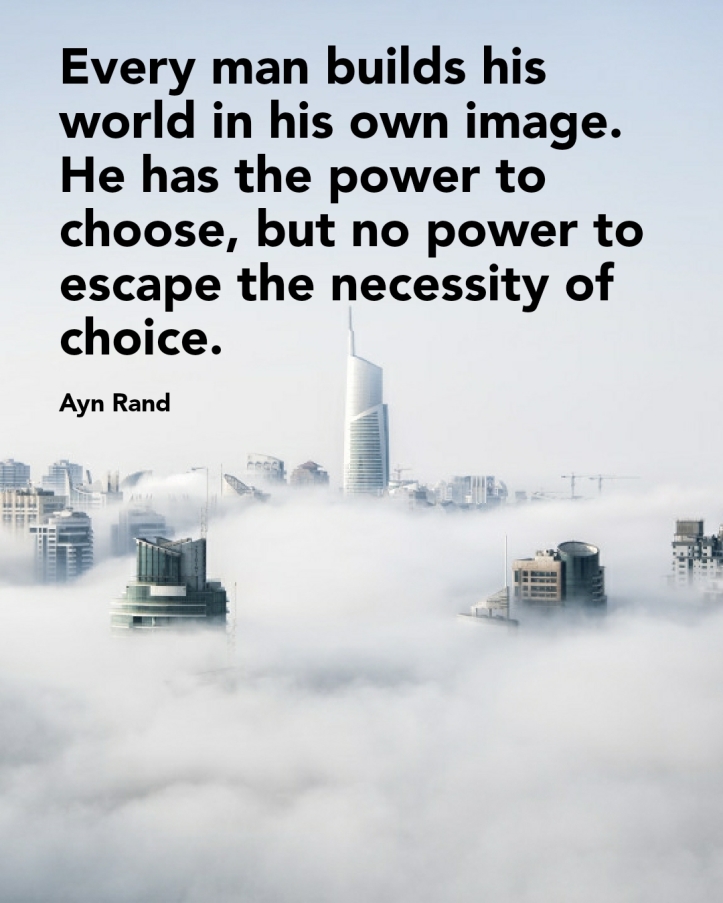 As Ayn Rand mentions you have the power to choose, but you can’t escape the fact that you must make choices as you traverse this life. Well, you might say fuck it, I’m checking out because everything is just too difficult or this world is filled with injustice and I don’t want to participate. Fine, then you have still made a choice, there is no escaping that choice is the one thing you cannot run away from. Here is the thing while it is true that you are building the world in your own image, there are always choices that you make that can change your image of who you think you are.

For most of us, we have way more choice than we think we have, yet we don’t make those decisions that can help break out of our current paradigm. I am as guilty as the next person of repeating patterns of behavior that keep giving me the same shitty result. Here are a few choices that are available to most of us that we defer:

Given you cannot avoid making choices, what choices will you make today, that will move your life forward, more in accordance with a life you can be proud of?

If you would like to support this blog, check out the awesome selection of eBooks at:

If eBooks aren’t your thing, check out my Resources page for additional ways to support this blog.

Visit my other blog Inspirational Book Reviews where I review some incredible literature.

Ayn Rand (/aɪn/;[1] born Alisa Zinovyevna Rosenbaum;[b] February 2, [O.S. January 20] 1905 – March 6, 1982) was a Russian-American writer and philosopher.[2] She is known for her two best-selling novels, The Fountainhead and Atlas Shrugged, and for developing a philosophical system she named Objectivism. Born and educated in Russia, she moved to the United States in 1926. She had a play produced on Broadway in 1935 and 1936. After two early novels that were initially unsuccessful, she achieved fame with her 1943 novel, The Fountainhead. In 1957, Rand published her best-known work, the novel Atlas Shrugged. Afterward, she turned to non-fiction to promote her philosophy, publishing her own periodicals and releasing several collections of essays until her death in 1982.

Rand advocated reason as the only means of acquiring knowledge and rejected faith and religion. She supported rational and ethical egoism and rejected altruism. In politics, she condemned the initiation of force as immoral[3] and opposed collectivism and statism as well as anarchism, instead supporting laissez-faire capitalism, which she defined as the system based on recognizing individual rights, including property rights.[4] In art, Rand promoted romantic realism. She was sharply critical of most philosophers and philosophical traditions known to her, except for Aristotle, Thomas Aquinas and classical liberals.[5]

Literary critics received Rand’s fiction with mixed reviews[6] and academia generally ignored or rejected her philosophy, though academic interest has increased in recent decades.[7][8][9] The Objectivist movement attempts to spread her ideas, both to the public and in academic settings.[10] She has been a significant influence among libertarians and American conservatives.[11