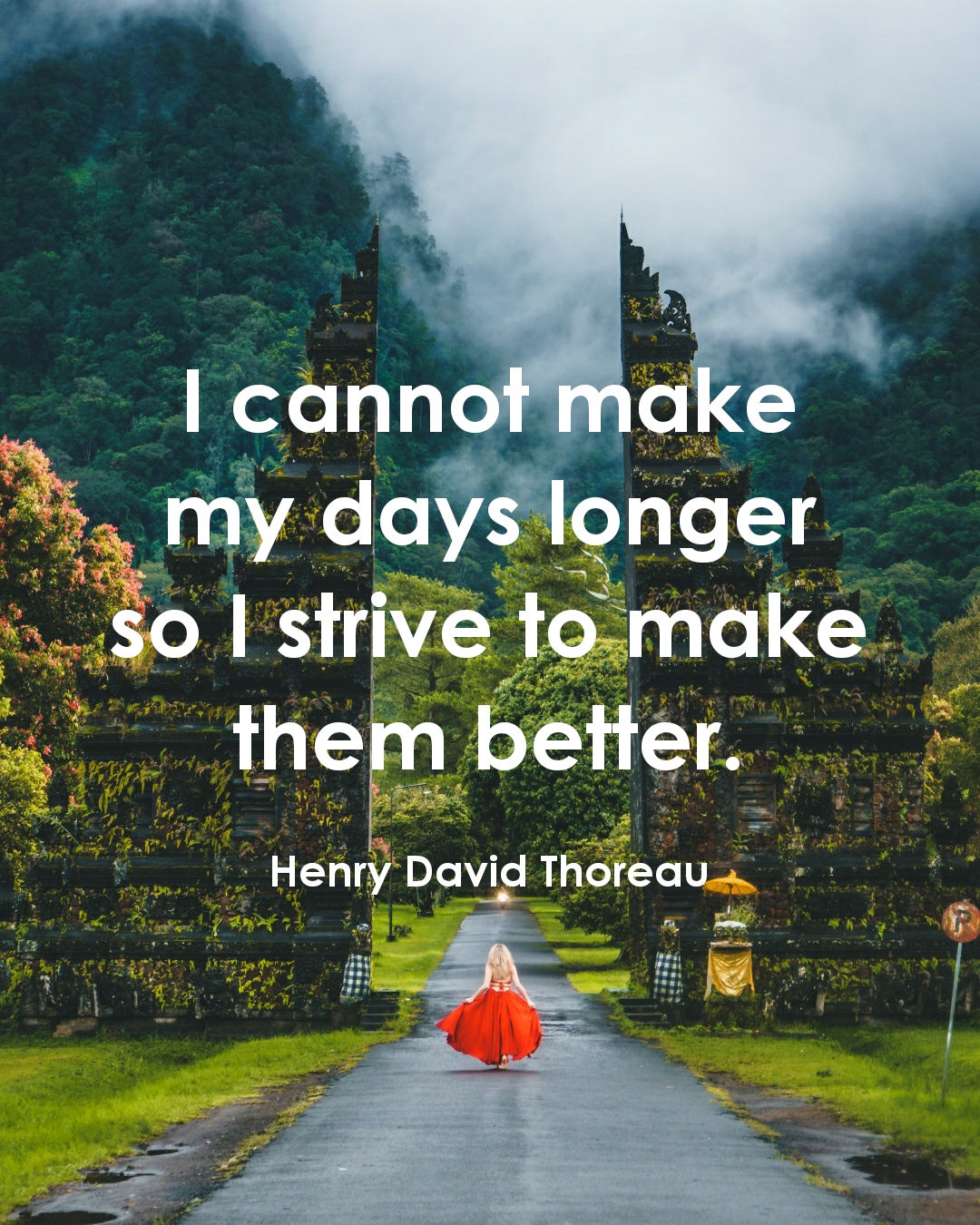 We all have a finite amount of time most of which we waste on pursuing material crap and satisfying our ever-increasing need for pleasure in various forms. Then we spend whatever time we have left searching for some kind of meaning in our life. It is unlikely that we will find a whole lot of meaning chained to a desk and computer, knocking out work day after day so we can buy more stuff. Knowing that our time on this earth is limited we better come to terms with a need to make these days better as Thoreau suggests.

As I have gotten older I have become less enamored with the stories that this world is constructed around. Stories like work harder and you will achieve more and these achievements will provide satisfaction. Other stories tell us that we must be goal-oriented ever pursuing greater things and not wasting our time. Still, other stories tell us that only through growth in revenue and GDP will we fulfill the capitalist dream of greater wealth for all. Most of these stories are bullshit and have been created to keep everyone in line, following the same path. While I’m pursuing all those goals, making money, and generally working my ass off there is no time for getting to know who I really am or what I really want out of this existence. I’m simply too fucking busy doing what everyone expects of me and adding to my investment balances.

The fact that you spend some time with your family, read a good book, take a walk, write a blog post, or take some time to do nothing but think is, in fact, making your days a little better. I currently work for a company that wants to dominate the world, and instead of my work being part of my life, it is more akin to being in a cult. You know the routine, work, eat, sleep, and repeat. I would guess my situation is not unique and that unless you take the reigns and regulate your behavior your life will never get any better. Remember you are an individual not a cog in the machine, as much as you relate to the organization you work for, their loyalty to you only extends one day at a time.

Life is impermanent by nature, and your employment status is even more precarious. Some of you know what I’m talking about and have been laid off so that the balance sheet looks a bit better. In my work life this happened a couple times and each time something better was right around the corner. I’ve seen people literally crushed by a layoff because they had invested so much of themselves, were extremely loyal to their employer, yet they were naive and couldn’t understand how this could have happened to them. I have a friend who once told me “At the end of the day we are even” and that is that. This is the attitude you need to have in this economy, don’t expect loyalty from your employer, because it does not exist.

Maybe this post has been in many ways a therapeutic exercise to take this quote to heart.

I cannot make my days longer so I strive to make them better.

Each day is a precious gift, and it up to you to find some kind of balance in your life.

Henry David Thoreau (see name pronunciation; July 12, 1817 – May 6, 1862) was an American essayist, poet, and philosopher.[3] A leading transcendentalist,[4] he is best known for his book Walden, a reflection upon simple living in natural surroundings, and his essay “Civil Disobedience” (originally published as “Resistance to Civil Government”), an argument for disobedience to an unjust state.

Thoreau’s books, articles, essays, journals, and poetry amount to more than 20 volumes. Among his lasting contributions are his writings on natural history and philosophy, in which he anticipated the methods and findings of ecology and environmental history, two sources of modern-day environmentalism. His literary style interweaves close observation of nature, personal experience, pointed rhetoric, symbolic meanings, and historical lore, while displaying a poetic sensibility, philosophical austerity, and attention to practical detail.[5] He was also deeply interested in the idea of survival in the face of hostile elements, historical change, and natural decay; at the same time he advocated abandoning waste and illusion in order to discover life’s true essential needs.[5]

He was a lifelong abolitionist, delivering lectures that attacked the Fugitive Slave Law while praising the writings of Wendell Phillips and defending the abolitionist John Brown. Thoreau’s philosophy of civil disobedience later influenced the political thoughts and actions of such notable figures as Leo Tolstoy, Mahatma Gandhi, and Martin Luther King Jr.[6]

Thoreau is sometimes referred to as an anarchist.[7][8] Though “Civil Disobedience” seems to call for improving rather than abolishing government—”I ask for, not at once no government, but at once a better government”[9]—the direction of this improvement contrarily points toward anarchism: “‘That government is best which governs not at all;’ and when men are prepared for it, that will be the kind of government which they will have.”[9]