Accept whatever comes to you 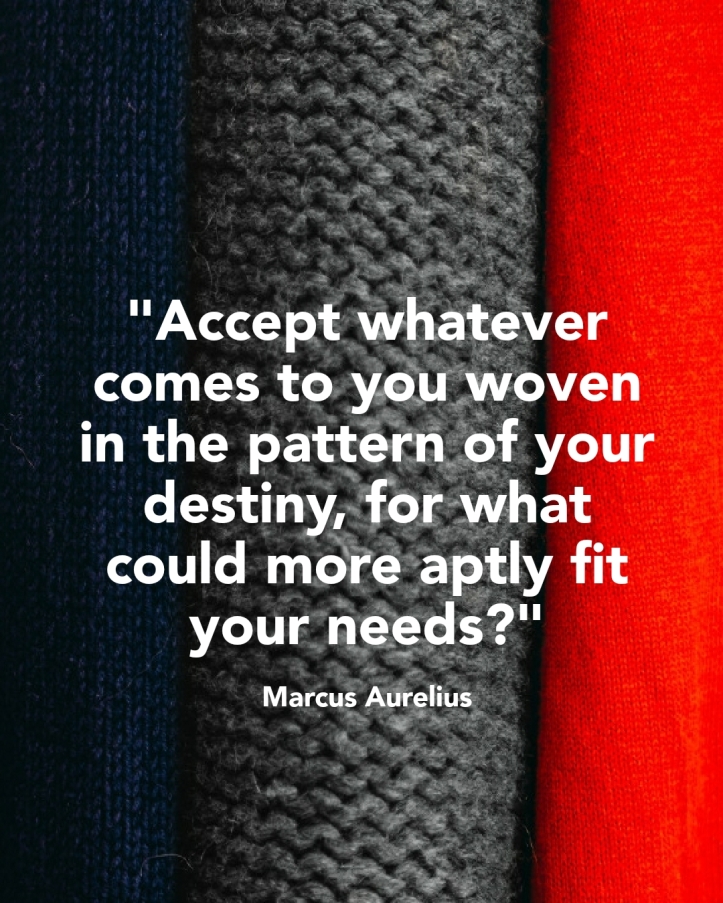 Marcus Aurelius was one of the few great Emperors of Rome and a Stoic Philosopher. Most of what he wrote was targeted at himself, creating a philosophy of  life for him to follow. His destiny was to become the Emperor of Rome, and this was something he felt that he needed to accept. I’m sure this wasn’t an easy decision for him, as the weight of the Empire was squarely placed on his shoulders. You might equate it to being the President or Prime Minister, except that in Roman times you were not only the leader, but often considered a God.

Each of has a destiny that is set forth for us even though sometimes we don’t realize it and often we fight against it and are not accepting. This quote is more about living your life in acceptance of what unfolds and understanding that this acceptance turns out to be what you need. When I say a destiny I’m not saying it is predetermined, but that this destiny evolves and we either accept it, or we fight against it. Acceptance will provide happiness and fulfillment, where fighting against it will result in resentment and pain.

This is one of the Stoic themes that life should be lived with acceptance and you should appreciate what life provides for you. This doesn’t mean you can’t aspire to something else, it just means that you should not get caught up in forever wanting something you don’t have.

What will it be for you, acceptance of the destiny that is unfolding for you, or rejecting what is transpiring in your life?

If you would like to support this blog, check out the awesome selection of eBooks at:

If eBooks aren’t your thing, check out my Resources page for additional ways to support this blog.

Marcus Aurelius (/ɔːˈriːliəs/ or /ɔːˈriːljəs/;[1] Latin: Marcus Aurelius Antoninus Augustus; 26 April 121 – 17 March 180) was a Roman emperor from 161 to 180 and a Stoic philosopher. He was the last of the rulers known as the Five Good Emperors (a term coined some 13 centuries later by Niccolò Machiavelli), and the last emperor of the Pax Romana, an age of relative peace and stability for the Roman Empire. He served as Roman consul in 140, 145, and 161.

Marcus was born during the reign of Emperor Hadrian to the emperor’s nephew, the praetor Marcus Annius Verus (III), and his wife the heiress Domitia Lucilla. Following the death of his father, Marcus was raised by his mother and grandfather Marcus Annius Verus (II). After Hadrian’s adoptive son, Aelius Caesar, died in 138, the emperor adopted Marcus’ uncle Antoninus Pius as his new heir. In turn, Antoninus adopted Marcus and the son of Aelius, Lucius (later to rule as Emperor Lucius Verus alongside Marcus). Hadrian died that year and Antoninus became emperor. Now heir to the throne, Marcus studied Greek and Latin under tutors such as Herodes Atticus and Marcus Cornelius Fronto. He kept in close correspondence with Fronto for many years afterwards. Marcus married Antoninus’ daughter Faustina in 145. Antoninus died following an illness in 161.

The reign of Marcus Aurelius was marked by military conflict. In the East, the Roman Empire fought successfully with a revitalized Parthian Empire and the rebel Kingdom of Armenia. Marcus defeated the Marcomanni, Quadi, and Sarmatian Iazyges in the Marcomannic Wars; however, these and other Germanic peoples began to represent a troubling reality for the Empire. He modified the silver purity of the Roman currency, the denarius. The persecution of Christians in the Roman Empire is believed to have increased during his reign. The Antonine Plague broke out in 165 or 166 and devastated the population of the Roman Empire, causing the deaths of five million people. Lucius Verus may have died from the plague in 169.

Unlike some of his predecessors, Marcus chose not to adopt an heir. His children included Lucilla, who married Lucius, and Commodus, whose succession after Marcus has become a subject of debate among both contemporary and modern historians. The Column and Equestrian Statue of Marcus Aurelius still stand in Rome, where they were erected in celebration of his military victories. Meditations, the writings of “the philosopher” – as contemporary biographers called Marcus, are a significant source of the modern understanding of ancient Stoic philosophy. They have been praised by fellow writers, philosophers, monarchs, and politicians centuries after his death.