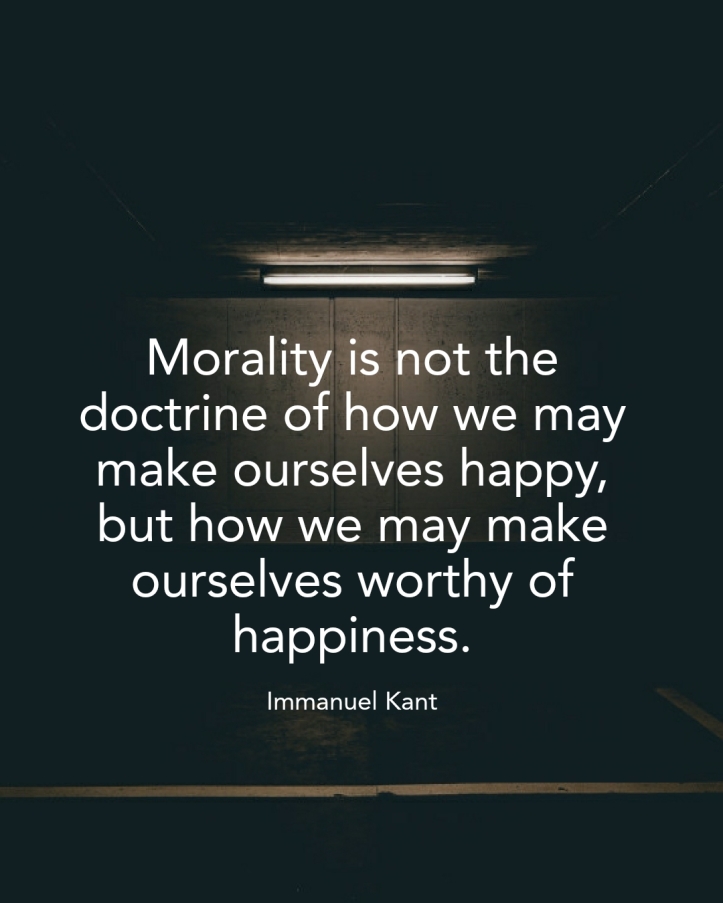 I was reading a quote this morning and thought it was very interesting. I knew little of Immanuel Kant, but what intrigued me was the premise that to be worthy of happiness you need to live a moral life. As I processed this thought that the possibility of happiness can be earned as a result of morality I thought about The Five Precepts in Buddhism, which are:

In Buddhism, the five precepts are a moral code for laypeople, or one could think of them as the fundamental baseline of morality. Read them and you begin to realize how broadly they can be applied and how powerful their influence could be on your personal conduct.

Personally, I tend to stay away from talking too much about morality, as it is often applied for example in religion to various behavior that I may see as moral and not immoral. Still, there is something about this quote that made me think that maybe we all need to strive to be more moral, and by doing so provide an opportunity to be a bit happier.

Note Kant does not equate morality to happiness only to being worthy of happiness. To me, this means real happiness like everything else must be earned, and in Buddhism, this starts with the Five Precepts. Can you be happy without striving to live a moral life?

If you are aware of the consequences of your actions and the impact they have on others, then the answer is no.

Who was Immanuel Kant?

He lived in the 1700s to early 1800 and was an influential German philosopher in the Age of Enlightenment. In his doctrine of transcendental idealism, he argued that space, time, and causation are mere sensibilities; “things-in-themselves” exist, but their nature is unknowable.

Kant’s theory is an example of a deontological moral theory–according to these theories, the rightness or wrongness of actions does not depend on their consequences but on whether they fulfill our duty. Kant believed that there was a supreme principle of morality, and he referred to it as The Categorical Imperative.

Well enough, for now, I need to start making myself worthy of happiness and do something good today, guess I will start by reflecting on the Five Precepts.

A little information on Immanuel Kant