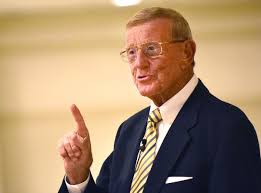 A couple of days ago I posted the following quote on Twitter and here on my quotes page “Life is ten percent what happens to you and ninety percent how you respond to it.”  Lou Holtz

I remember earlier in the week when my wife called me and said that she thinks we have problems with our home’s foundation. There were tiles cracking in the kitchen, grout coming up, some cracks in the walls, and it appeared that some of the floors were not level. When I heard this I immediately overreacted whining about how much this would cost me, and what a piece of crap this old house of ours was. We had invested lots of money in air conditioning, pest control, and insulation; all things you cannot see but needed to be done. So clearly I had reacted very poorly, and to  prove this out a day later when the house was inspected we found that nothing was wrong. We live in Texas and it is common for some of these things to happen, and we were told to keep the ground around the foundation wet with a soak-er hose three days a week for 40-60 minutes during the summer months. I guess it is a Texas thing where the moisture seems to help maintain the integrity of the foundation preventing the ground from cracking and shifting here from the severe heat.

Not only had I reacted like a dumb ass, but my reaction was premature occurring before the inspection even took place. This is probably why I liked this quote from Lout Holtz so much. A persons true character is not something you exhibit when everything is going your way, but instead it is revealed when things are not going your way. I learned a lesson this week that it is how you respond to life that is most important. None of us can escape pain, misfortune, disappointments, and many of the other unpleasant things life has in store, but we can all control how we respond to these challenges.

It is extremely important that you have a cautious response when it comes to perceived bad news. Moving into a negative mind state where you imagine the worst only damages your peace of mind and sends a message to others that you are not a real leader. So the choice is always clear you can respond in a negative fashion or you can respond as a leader and make the best of the situation. Now my example pales in significance to the challenges some people face, but it does illustrate a point.

Don’t imagine the worst and think about the example you set for those around you. In addition to how your response affects others is the fact that a negative response only causes personal psychological damage tainting all your thoughts. Lou was right, it is about how you respond that matters.